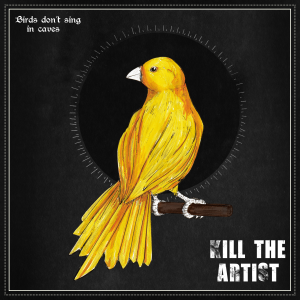 Kill the Artist, a Post-Hardcore/alternative rock band based out of Southern Ontario. The members range across a diverse geological area and personal backgrounds. The sound they create is often aggressive but beautiful. They put every ounce of emotion they can spare into each down stroke of a rhythm guitar and hit hard vocally where it counts. Lead guitar lines jump out to grab your attention and the solid bass foundations will keep you grounded. It’s aggressive but not violent. Sharing many similar musical influences such as: Alexisonfire, City and Colour, Thrice, Rise Against, Tool, and many more.

I like to explain the thought behind “Kill the Artist” through a quote by Kurt Vonnegut in a 1973 issue of Playboy: “Writers are specialized cells doing whatever we do, and we’re expressions of the entire society — just as the sensory cells on the surface of your body are in the service of your body as a whole. And when a society is in great danger, we’re likely to sound the alarms. I have the canary-bird-in-the-coal-mine theory of the arts. You know, coal miners used to take birds down into the mines with them to detect gas before men got sick. The artists certainly did that in the case of Vietnam. They chirped and keeled over. But it made no difference whatsoever. Nobody important cared. But I continue to think that artists — all artists — should be treasured as alarm systems.”

Currently, the band has finished up a 5 song EP projected called “Bird’s Don’t Sing in Caves.” Which was released with Caledon Hills Brewery who partnered with us to share their beer with the first 48 albums sold. The main single “Bird’s Don’t Sing in Caves” was Produced and mixed by Harley Tamblin at Acrylic Recording. The rest of the song was recorded at We Love Sound Inc. The 2 previously released songs are titled “Don’t Leave Me Here” and “Down the Middle.” Both songs were recorded entirely at band member Dayne Gerous’ home studio called We Love Sound Inc (www.welovesound.ca). The songs were also co-produced along with Alan Cross who gave what insight and wisdom he could. Kill the Artist is the first band Alan Cross has a producers credit on. The songs were also mixed by Dave Schiffman whose impressive credits include: The Red Hot Chilli Peppers, Thrice, System of a Down and Tom Petty to name a few. Finally the songs were mastered by the elegant Brett Zilahi whose credits include: City and Colour, Alexisonfire and Triumph. These songs were released March 2019 with accompanying music videos. The final 2 tracks on this album are “Narcissism and Lateness” and “Penguins are a Flightless Bird”. Both recorded over quarantine and completely recorded/mixed/mastered and produced by We Love Sound Inc and Kill the Artist.

Bird’s Dont Sing in Caves is based on the allegory of Plato’s Cave. It’s basically his attempt at explaining how do we know what’s true and real. After seeing so much negativity on facebook’s social network, I felt it applied well to Plato. He explains people chained in a cave..staring at a wall..and to them it’s all they know and the absolute truth. They see a shadow of a dog and as far as they know, that shadow is a living breathing thing. One person escapes and finds a whole world. All the shadows are just reflections of the real things. That person goes back to explain it to the others who become violent, calling him dumb and refuse to believe what they see is not true. Just remember to remind yourself, there is more out there beyond this wall, and you shouldn’t just believe what you see. Not even this.

The bands 2 previous songs sum up basically to be about sacrifice. They came out particularly at a hard time in vocalist and guitarist Ben Saunders life. He had recently had to learn how to function and work as a single dad. The songs are about the sacrifices we do for our loved ones and for the things we love. Ben, as we all have felt as musicians, had been looked at as “Why are you in a band? You should grow up! You should be more responsible!” As was well said by Ben, “Isn’t the best thing I could do for my daughter to teach her to reach for her dreams? To work hard for what makes her truly happy? That she, and anyone, is truly capable of anything?”

Further background about the band members:

Vocalist and additional guitarist Dayne Gerous runs his own recording studio and is a full time sound tech. He has done concert production for bands such as Monster Truck, Our Lady Peace, USS, Buckcherry, Theory of a Deadman, The Trews and many more. He’s been in punk bands since the age of 14 and his most prominent venture was with the group “Buddy Black’ that played venues across Canada and the U.S., including ComiCon in Detroit. Ben Saunders, Vocalist, lead guitar and founding member, is a single dad, self employed and experienced musician and Newfie. He is also a skill pianist. His last project “10 Dead Poets” went strong for a good 8 year run. Reuban Bakker, our arms of steel and drummer, is an accredited sound technician with over 6 years experience in high end event and concert production. He’s able to not only bring a technical view to the drums but an emotional intensity that really helps solidify the bands sound. He’s toured with The Shanks as a sound engineer and drummer. Ben Lessard, our bassist, is a dedicated member of the military and focused musician. This is one of his first legitimate band projects but we see great things coming from those bass fingers.

No shows booked at the moment.